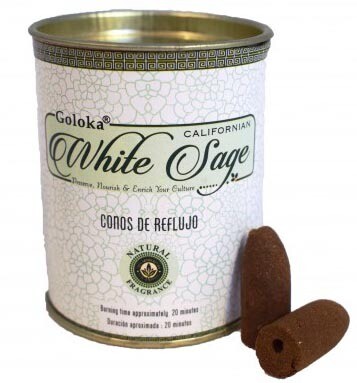 
100% natural, perforated at the base to allow the backflow effect, cascade reflux on the specific incense holder.
Sage Apiana fragrance

These Goloka incense cones are available in a practical resealable tin box. There are 24 cones in each box with a burn time of approximately 20 minutes per cone. These incense cones can be used in conjunction with a backflow burner to create impressive smoke shows.

All the ingredients of this product are natural and exclusively organic, non-toxic and do not cause danger to the ozone layer, even and especially during the production process.

Curiosity
Sage Apiana, from the Latin to save, so called because its flowers attract bees, is a desert shrub native to southwestern America and Mexico. The dried leaves have a sweet and slightly pungent aroma.We have many testimonies on the use of this plant by Native American tribes such as Lakota, Chumash, Cahuilla who were accustomed to using it in the post partum and the interesting thing is that 2007 study found that in one hour of slow burning with a lot of smoke it decreased the level of airborne bacteria by 94% and these effects were preserved for 24 hours and always by scientific evidence, burning this sage releases negative ions and this fights the allergens that proliferate in the presence of positive ions such as mold, animal dandruff and dead skin, dust and pollution. Burning the sage can therefore be a benefit for those who have respiratory problems, such as allergies, bronchitis and asthma, but inhaling the smoke during fumigation can aggravate these diseases, it is advisable to ventilate the premises before staying there.

Sage is traditionally used in Native American medicine and shamanic practices and is renowned for its wholesome and benevolent energy. The scent calms the mind and purifies the body. It is believed that sage smoke has the power to bring prayers to the skies, remove malevolent spirits and cleanse from harmful places and gold energies which is inclusive of the electromagnetic field emitted by living organisms, see the cardiological studies in which it is highlighted. that field. Continue a tradition of healing and blessing with this amazing plant!
Save this product for later