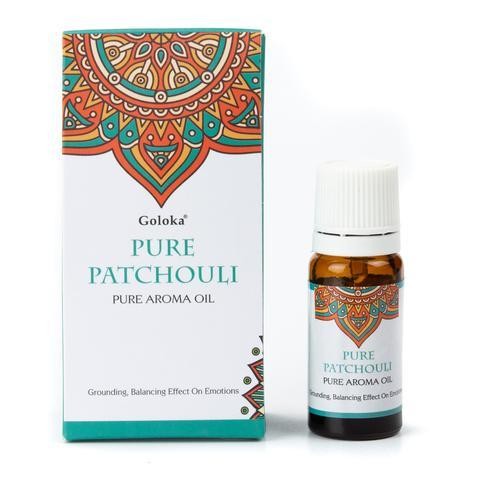 These high quality aromatic oils are produced by Goloka.

Patchouli oil comes from a species of plant of the genus Pogostemon. From the labiatae family, it includes lavender, mint and sage. This bushy grass has stiff stems, reaching five to six feet tall, and produces small pale pink flowers. The plant is native to the tropical regions of Asia, and is now widely cultivated in China, India, Malaysia, Indonesia, Mauritius, the Philippines, Taiwan, Thailand, and Vietnam.

The extraction of essential oil of patchouli takes place by steam distillation of the leaves; the cell walls must be broken with boiling steam, light fermentation or drying of the leaves. Patchouli leaves can be harvested several times a year and when dried they can be exported for distillation.

The strong scent of patchouli oil has been used in perfumes for centuries; more recently it has been used in incense, insect repellents and alternative medicines. It is also commonly used for skin care due to its ability to help relieve skin problems, and is considered one of the best home remedies for acne, as well as eczema, inflammation, and chapped or irritated skin. It has cell rejuvenating properties, which is why it is often used in anti-aging treatments and reduces scarring.

The antifungal properties of Patchouli oil make it useful in the treatment of athlete's foot and has the property of relieving inflammation caused by an infection. It also helps with the problem of dandruff, as it balances oiliness and increases the defenses of the scalp.

There are so many amazing health and beauty benefits in just a few drops of patchouli oil.

Some of the more common benefits of patchouli essential oil include:

works as a natural deodorant

stops the growth of fungi

works as an insect repellent

fights fever
Save this product for later
Display prices in: EUR