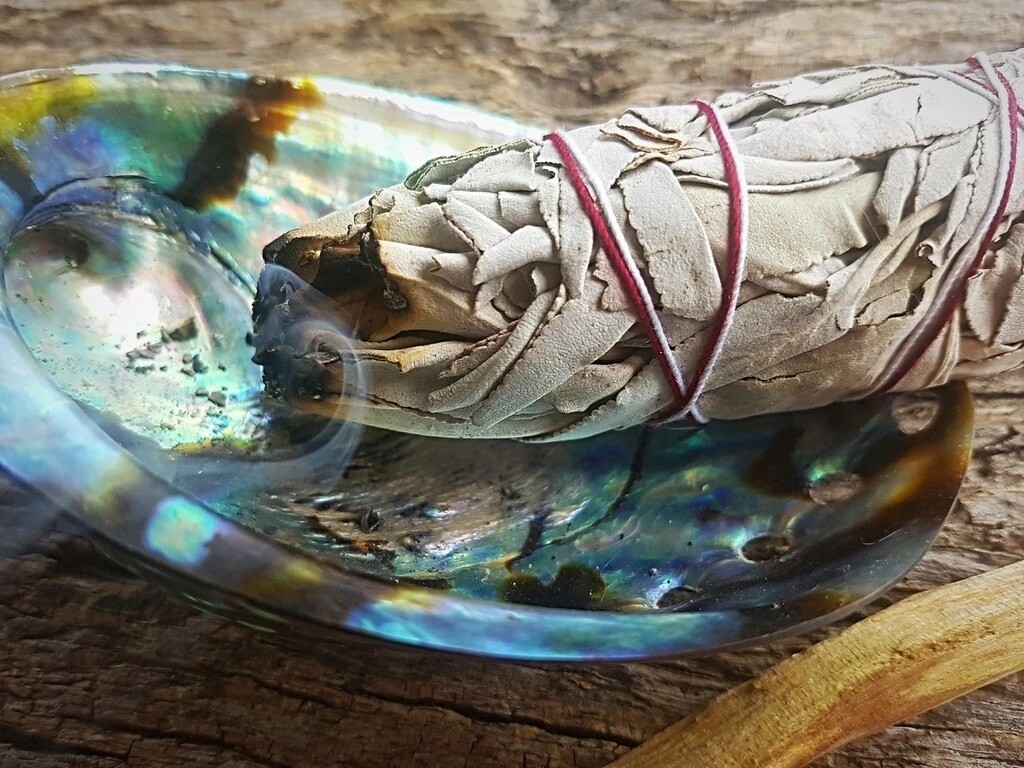 How to use Salvia smudge
Use a lighter to light the tip, turn off the flame so that the leaves slowly turn into embers. Then, carefully spin and move it smudge it around doors and windows and into corners of the room. Store the ashes in a heat-resistant ashtray. (An abalone shell is traditional, but you can use an incense burner or even a regular dish, as long as you put something under it.) The smudges can eventually be turned off naturally and reused many times over. Obviously, never leave it on unchecked.

This natural product is also ideal for environmental scent, its pungent aroma transports the mind into tribal and shamanic atmospheres, for an expert psychonaut it is a good help to calm and protect during travel ...

Related products:
Our fantastic NaturAir Kits include this smudge, but in addition you can give yourself a magnificent kit that includes a wide variety of natural products for fumigations, energetic cleaning and room fragrances!

Curiosity
Salvia Apiana, from the Latin to save, so called because its flowers attract bees, is a desert shrub native to southwestern America and Mexico. The dried leaves have a sweet and slightly pungent aroma.We have many testimonies on the use of this plant, by Native American tribes such as Lakota, Chumash, Cahuilla who were accustomed to using it in the post partum and the interesting thing is that one 2007 study found that in one hour of slow burning with emitting a lot of smoke it decreased the level of airborne bacteria by 94% and these effects were preserved for 24 hours and always by scientific evidence, burning this sage releases negative ions and this fights the allergens that proliferate in the presence of positive ions such as mold, animal dandruff and dead skin, dust and pollution. Burning the sage can therefore be a benefit for those who have respiratory problems, such as allergies, bronchitis and asthma, but inhaling the smoke during fumigation can aggravate these diseases, it is advisable to ventilate the premises before staying there.

The smoke of white sage has been used for millennia by Native Americans to purify environments and living beings from any evil spirit or negative energy.
It is often used to purify places both before and after a ceremony. It can also be used to purify rooms where negative events have occurred, such as a fight or when you feel restless, or in environments where you enter for the first time.


In this case it may be sufficient to let a sprig or a leaf of Salvia burn on a charcoal, while if you want to do a deep cleaning you can go around the room, especially in the corners, in front of doors and windows, with a smudge of white sage switched on.

The purification is immediate and very profound.


After lighting the smudge, you have to wait for some embers to form before extinguishing the flame, thus letting the embers emit the sacred, characteristic smoke.


White Salvia is used by Cahuilla women (Native American tribe settled in California), to prepare an herbal tea to recover after childbirth. In other tribes it was used for the preparation of sweets and energy potions.
Save this product for later
Display prices in: EUR