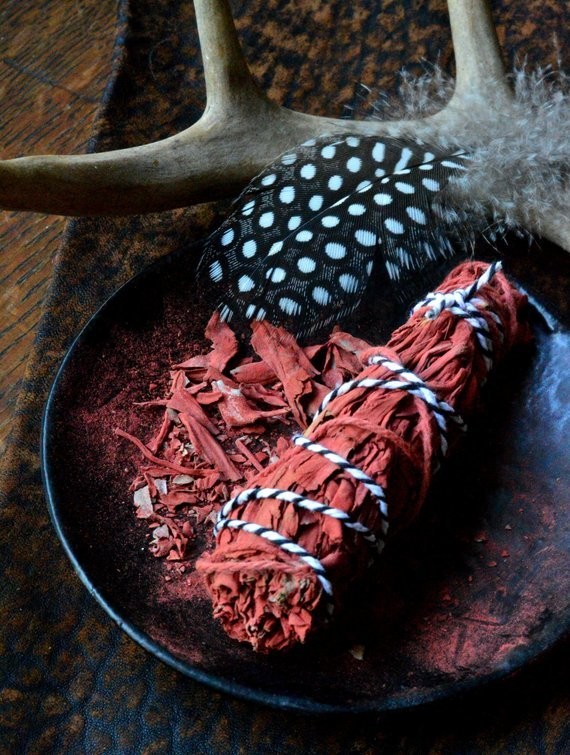 
How to use sage smudge

Use a lighter to light the tip, turn off the flame so that the leaves slowly turn into embers. Then, carefully spin and move it smudge it around doors and windows and into corners of the room. Store the ashes in a heat-resistant ashtray. (An abalone shell is traditional, but you can use an incense burner or even a regular dish, as long as you put something under it.) The smudges can eventually be turned off naturally and reused many times over. Obviously, never leave it on unchecked.
Uses

This unique blend is ideal for your cleansing, consecration and protection rituals. This natural product is also ideal for environmental scent, its pungent aroma transports the mind into tribal and shamanic atmospheres, for an expert psychonaut it is a good help to calm and protect during travel ...

Salvia Apiana, from the Latin to save, so called because its flowers attract bees, is a desert shrub native to southwestern America and Mexico. The dried leaves have a sweet and slightly pungent aroma.We have many testimonies on the use of this plant, by Native American tribes such as Lakota, Chumash, Cahuilla who were accustomed to using it in the post partum and the interesting thing is that one 2007 study found that in one hour of slow burning with emitting a lot of smoke it decreased the level of airborne bacteria by 94% and these effects were preserved for 24 hours and always by scientific evidence, burning this sage releases negative ions and this fights the allergens that proliferate in the presence of positive ions such as mold, animal dandruff and dead skin, dust and pollution. Burning the sage can therefore be a benefit for those who have respiratory problems, such as allergies, bronchitis and asthma, but inhaling the smoke during fumigation can aggravate these diseases, it is advisable to ventilate the premises before staying there.


Sage is traditionally used in Native American medicine and shamanic practices and is renowned for its wholesome and benevolent energy. The scent calms the mind and purifies the body. It is believed that sage smoke has the power to bring prayers to the skies, remove malevolent spirits and cleanse from harmful places and gold energy which is inclusive of the electromagnetic field emitted by living organisms, see the cardiological studies in which it is highlighted. that field. Continue a tradition of healing and blessing with this amazing plant!

Dragon's blood
Dragon's blood resin comes from the collected and dried sap of many plant genera. It is usually harvested from a climbing Agavaceae type, "Daemonorops draco".
There are several other plants used to extract dragon's blood resin such as Dracaena cinnibari (Somalia) Dracaena draco (Canary Islands) and Croton draco (Mexico). In Mexico, dragon's blood resin is sometimes called Sangre de Drago, it can also be collected from Calamus rotang and Pterocarpus.
These plants grow in many other places in the world, including Australia, the Pacific islands, Southeast Asia, the islands of the Malay archipelago, etc. Most of the commercial dragon's blood resin comes from Malaysia and Indonesia.
Ancient uses
The thorns of the Dragon's Blood plant recall the magical uses of the resin. The thorns protect the plant from herbivores and protection is one of the most popular uses of the resin, in particular, it offers excellent protection from psychic predators. The thorns can also help camouflage pollinating insects, again a form of reproductive protection for the plant that defer to a second use.
The dark blood-red resin of Daemonorops when secreted, this layer oxidizes. The resin is collected during the summer also from the fruit which are collected and stored in bags, then beaten to dissolve the resin. The powdered resin is then sieved and heated to form lumps. The stems of Dracaena and Croton also produce the resin which is collected by making incisions on the trunk.
Dragon's blood resin has a long history of use as a disinfectant and hemostatic for wounds in Europe, Mexico, Asia and many other areas. The early Greeks and Romans used the resin for medicinal purposes, often to stop bleeding, and Dioscorides wrote of its many uses.
The resin was also used by 18th century Italian luthiers as a lacquer. It is still used as a protective coating in photoengraving and in some paints protective. For these types of manufacturing uses, the resin is often marketed as oleoresin.
Dragon's blood resin is also used in the sacred calligraphy of China and Japan. This type of ancient art is called Sumi-e, and red ink, often from dragon's blood, is ground on a piece of stone (suzuri). The powder is then mixed with water and used as a type of "ink pad" for the signature stamp (called Hanko or Chop) and has been practiced in Asia for thousands of years.

Modern magical uses for dragon's blood pre-blended ink are usually for protection, strength, and extra energy or power in addition to a job.
The dragon's blood resin sold in most stores can vary widely in its origin and therefore in the fragrance it emits when burned as incense. Some eucalyptus species are also used to produce a type of "Dragon's Blood" resin and usually traders do not know the origin of the resin. Some resins may smell like rubber or plastic when burned, others may emit a subtle scent of myrrh. When not burned, the resin smells like rosehip pulp, very ripe and fresh.
Incense and oils
Dragon's Blood oils and frankincense are typically the result of a small amount of resin (if any), along with scented oils and essential or woody oils.
Dragon's blood is not normally steam distilled, to produce a true natural essential oil, its fragrance does not guarantee this use. Instead, you can powder the resin and dissolve it in other oils. A little heat will speed up this process, and a coffee filter will remove impurities or undissolved plant matter.
If you like the effects and fragrance of essential oil or frankincense, the above technique can be used to add oomph to store-bought blends that may not contain the resin. These blends may have excellent properties in their own right, but adding some of the raw material to it will really boost the energy.
Incense sold as "dragon's blood" rarely contains resin, particularly when purchased in stick form with the bamboo stick. There are some excellent fragrances sold as dragon's blood and their properties are almost identical. However, if you put these sticks in a plastic bag and sprinkle them with powdered resin, you will find that their power will increase dramatically.
As previously mentioned, the scent of burning dragon's blood resin varies depending on the type of plant it was extracted from, along with the type and amount of impurities it may contain. It doesn't necessarily smell good, so adding powder to joss sticks or oil blends is a great way to get energy without any unpleasant odors. In oils, this will also increase their astringent and medicinal properties.
Save this product for later
Display prices in: EUR